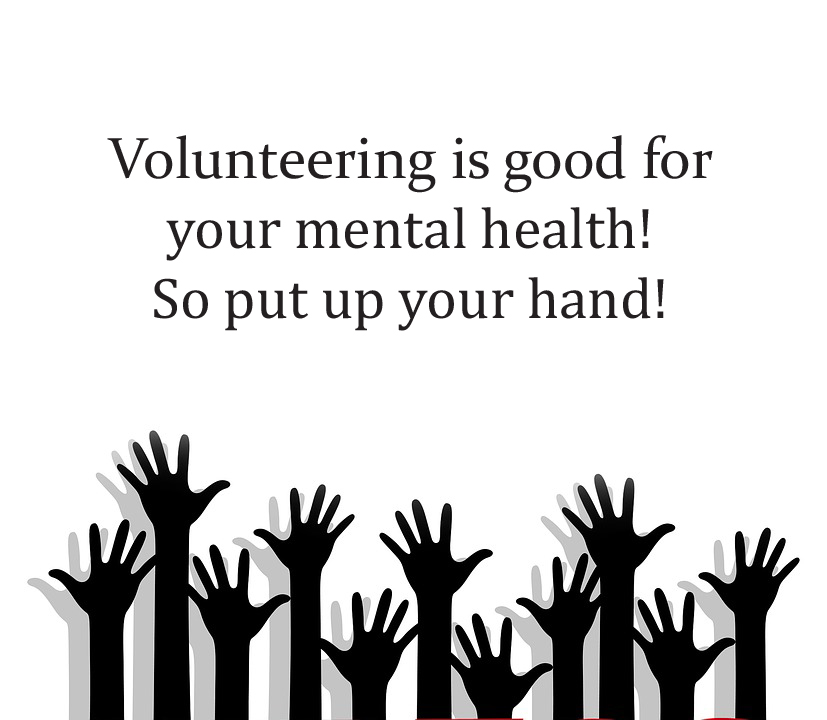 VOLUNTEERING in middle and older age is linked to good mental health and emotional wellbeing, according to a survey of 5000 British adults. Researchers Drs Faiza Tabassum, John Mohan and Peter Smith mined responses to the British Household Panel Survey (BHPS), which is conducted every two years on a representative sample of adults living in Britain.

The survey included a wide range of questions on how participants spend their leisure time and a battery of questions to measure mental wellbeing. Around one in five respondents (21 per cent) said they had volunteered. Women tended to volunteer more than men. Almost a quarter of those aged 60 to 74 said they volunteered, but only 17 per cent of the youngest age group. No association was seen between volunteering and mental health in people under 40.

The mental health scores were better (lower) among those who volunteered than among those who had never done so—10.7 vs 11.4—across the entire sample, irrespective of age. The average score was the best (lowest) among those who were frequent volunteers and worst (highest) among those who never volunteered. A positive association between volunteering and good mental health and emotional wellbeing became apparent at around the age of 40 and continued up into old age (80+). The researchers speculate that volunteering at younger ages may just be viewed as another obligation, while social roles and family connections in early middle age may spur people to become involved in community activities, such as in their child’s school.

The researchers were not able to gauge the extent of ‘informal’ volunteering, such as helping out neighbours, so couldn’t capture the full spectrum of voluntary activities. “Volunteering might provide those groups with greater opportunities for beneficial activities and social contacts, which in turn may have protective effects on health status. With the ageing of the population, it is imperative to develop effective health promotion for this last third of life, so that those living longer are healthier,” they write.

Previous research indicates that people who volunteer are likely to have more resources, a larger social network, and more power and prestige, all of which have knock-on effects on physical and mental health, they point out. “Volunteering may also provide a sense of purpose, because regular volunteering helps maintain social networks, which are especially important for older people who are often socially isolated,” they add.

Curtin University research professor Simone Pettigrew said the British results almost certainly also applied to Australia. “There have been some studies showing a relationship between volunteering and well-being among older Australians, mainly by Jeni Warburton from La Trobe University. Our (Curtin’s) random controlled trial that is close to finishing is aiming to test exactly this in WA by looking at both the physical and psychological predictors and consequences of volunteering among older people (60+ years). I’m hoping we’ll have some interesting results to share with you in due course,” she said.

If you are interested in volunteering for Health Consumers’ Council (WA) call (08) 9221 3422 and ask for Lucy Palermo or email lucy.palermo@hconc.org.au

You may have heard about Press Ganey, the patient experience survey being implemented in Perth hospitals including Royal Perth, Bentley, Fiona Stanley, Sir Charles Gairdner and Osborne Park Hospitals. The survey is sent out to patients two weeks after they have been discharged home and seeks feedback on a range of different measures. The question was asked about how this ensures a diverse response, e.g. from Aboriginal and non English speaking patients.

At our most recent Consumer Advisory Council Roundtable, we had their CEO, Amanda Byers provide a presentation on how their survey works. For those who were unable to attend, a video of the presentation is available below. It is just under 45 minutes long. The powerpoint is available here, however it is well worth watching the video as it makes sense of the slides’ information.

The third slide has a useful reflection on the suffering that a patient will undergo when in hospital. It notes that there is suffering unavoidably associated with both diagnosis and treatment. The avoidable suffering caused through defects and care in service is where the Press Ganey survey focuses. Press Ganey also highlighted that it was a validated tool which means it has had psychometric testing to ensure a reliable result.

Once the survey results are returned to Press Ganey they are analysed and the reports provided to the hospital. This process can see about a three to six month delay between the healthcare episode and when the feedback is provided to the healthcare service. Some hospitals such as Royal Perth are also implementing questionnaires that Community Advisory Council members undertake with patients to ensure a quicker response when issues are identified. The presentation did highlight however that service improvement can be supported through Press Ganey surveys using the example of a large hospital in Asia which transformed their health service in nine months. Despite this health service’s initial concerns about how well this would work, their performance improved significantly. 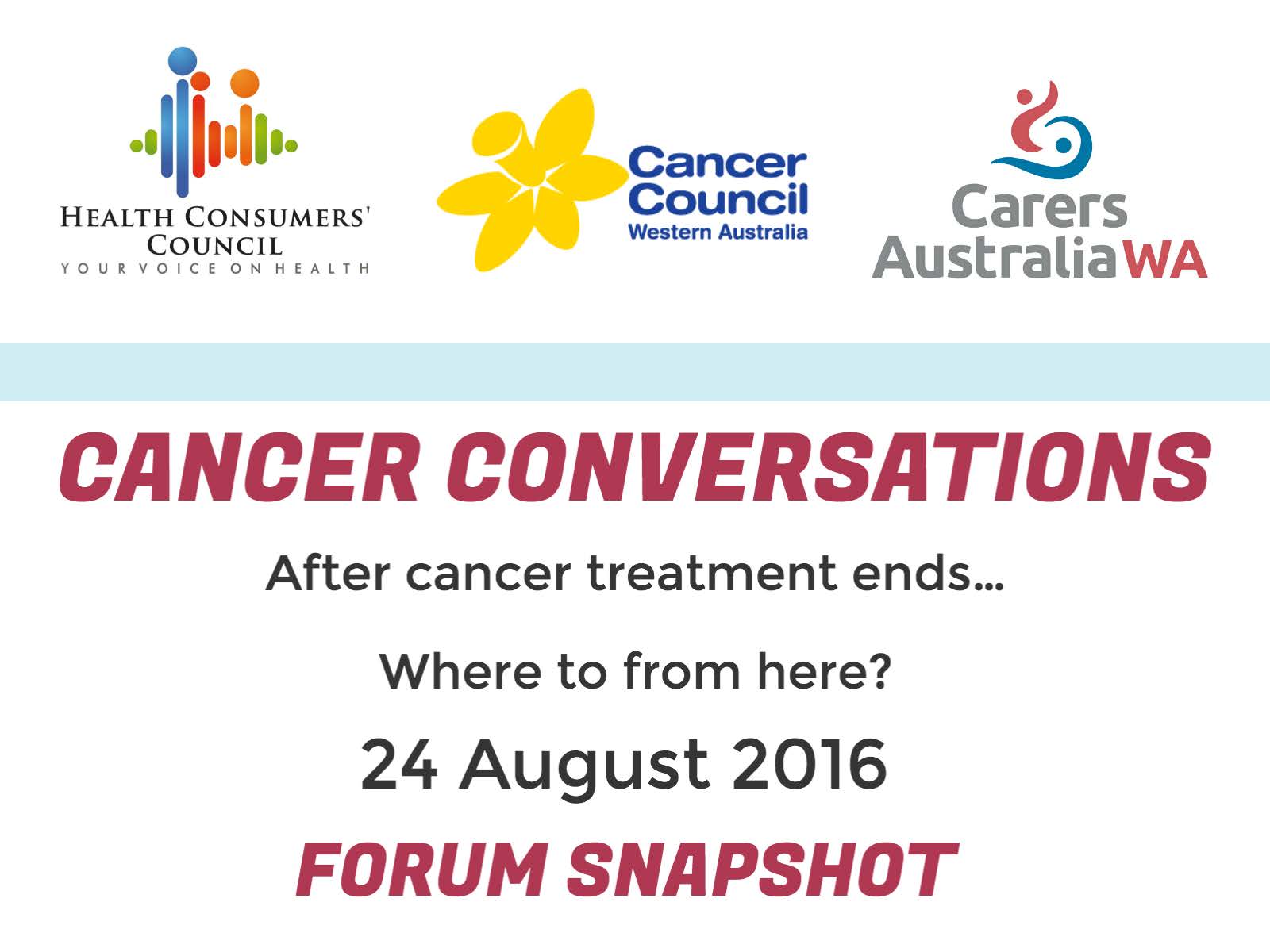 The report from the Cancer Community Conversation Forum, ‘After cancer treatment ends…Where to from here?’ held in partnership with Cancer Council WA, Health Consumers’ Council and Carers WA has been released. The following are snapshots developed from the day: 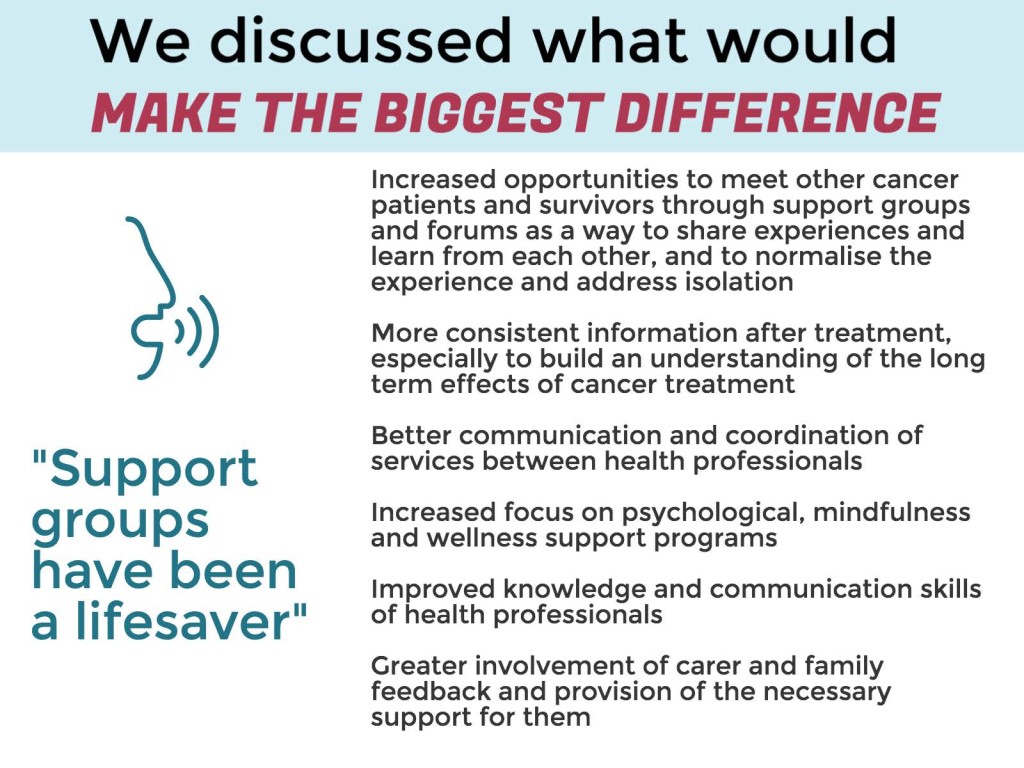 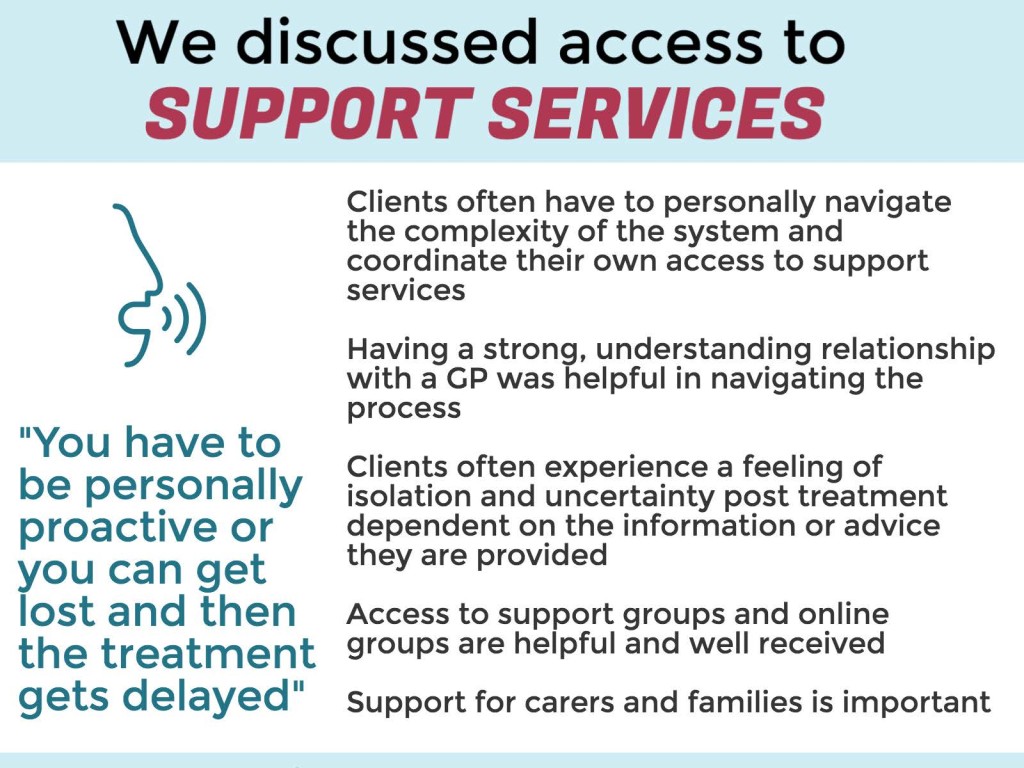 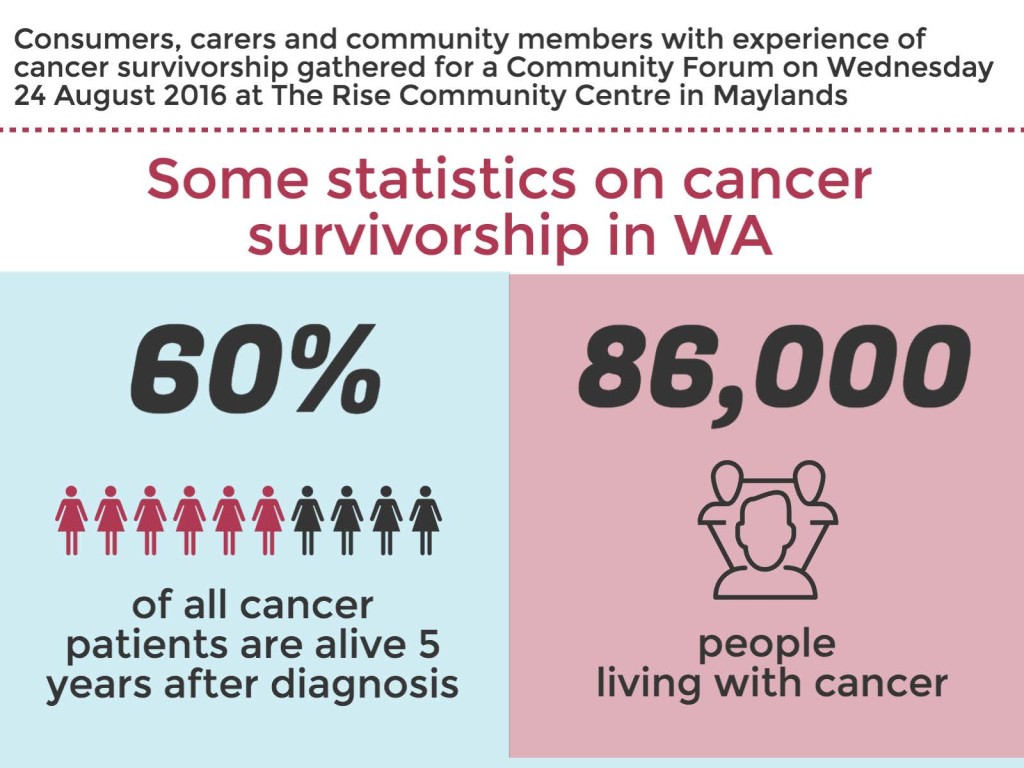